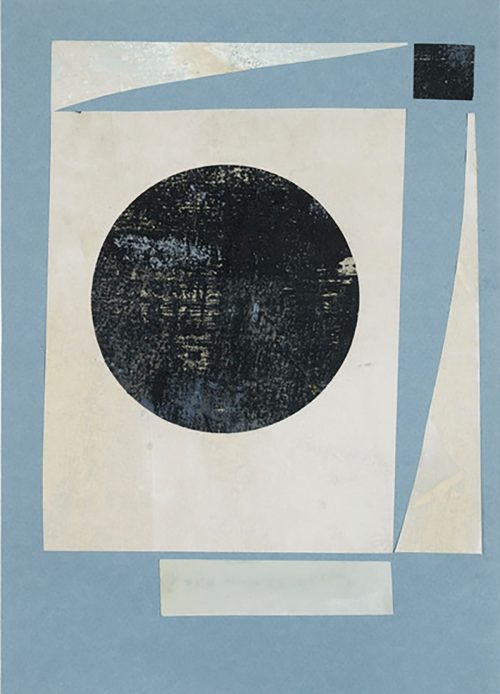 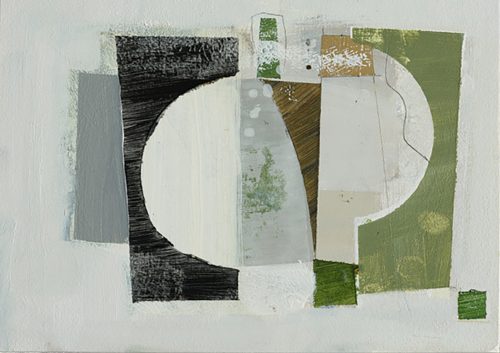 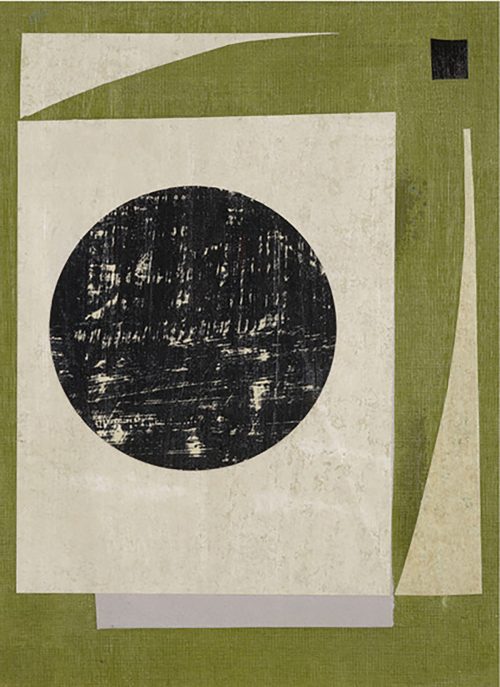 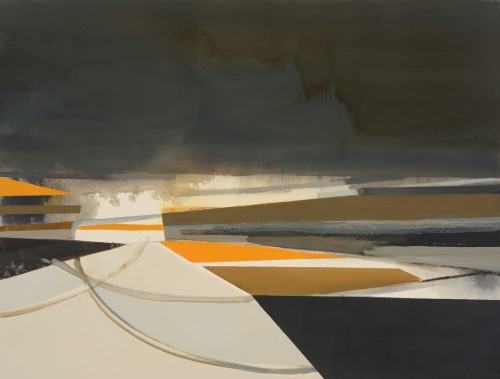 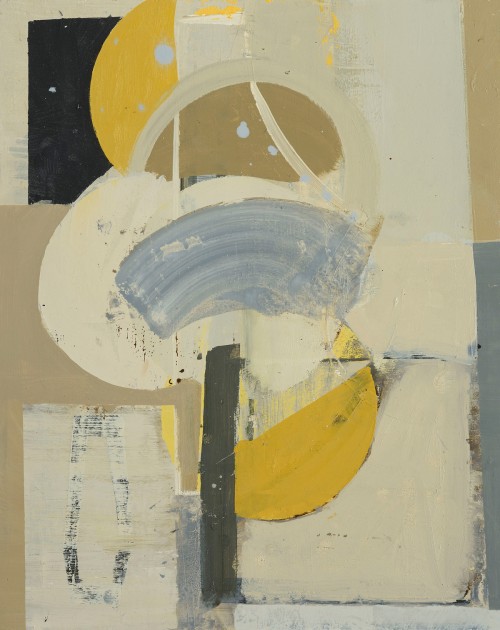 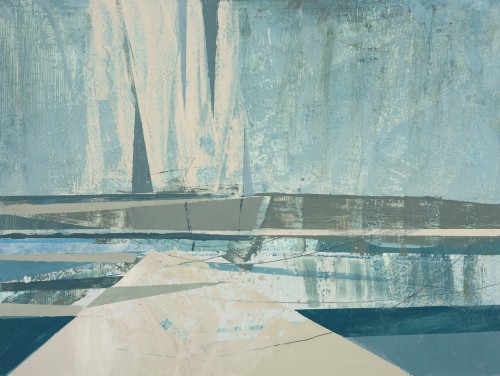 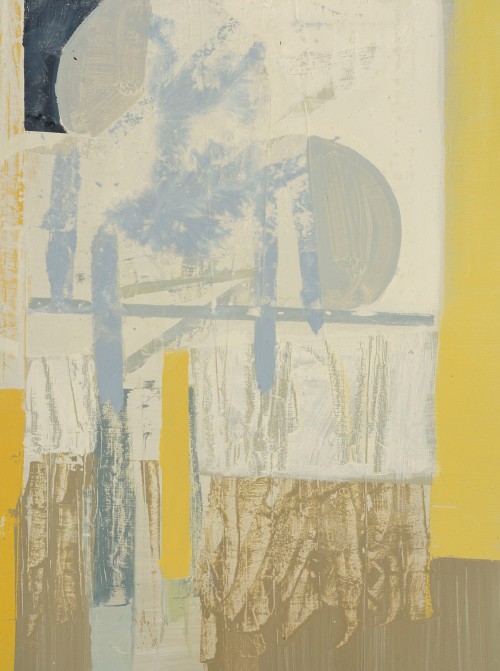 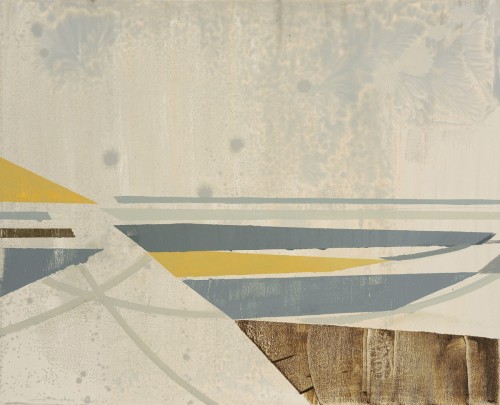 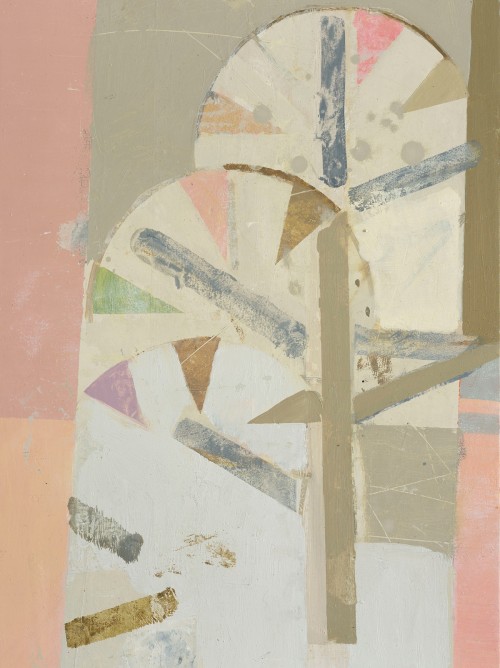 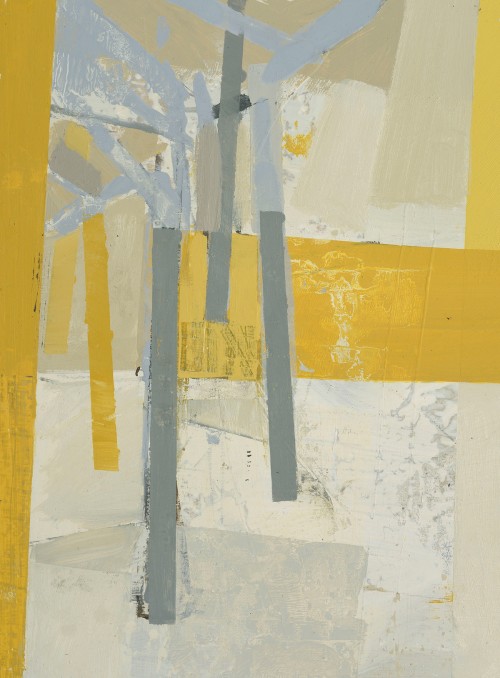 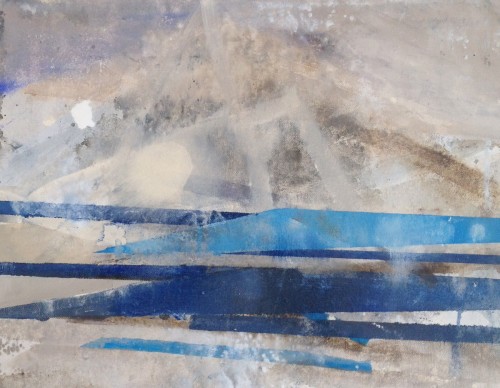 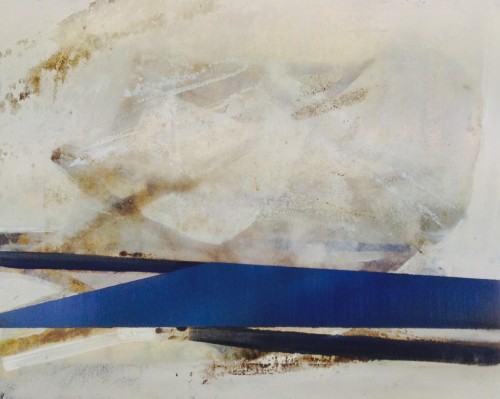 View from Andrew Lambirth, May 2006 When Thomas Hardy wrote: ‘Nature is played out as a Beauty, but not as a Mystery’, he was voicing an authentic artistic response to the general longing to know more about the natural world which the study and pursuit of science had engendered. He went on: ‘I don’t want to see the original realities – as optical effects, that is. I want to see the deeper reality underlying the scenic, the expression of what are sometimes called abstract imaginings.’ Daisy Cook makes paintings which deal with these abstract imaginings. She has also never been afraid to engage with beauty, though she is not drawn to its more obvious manifestations. Her latest paintings bear ample witness to this. The meeting point of land, sea and sky has long been a focus for her art. Cook makes paintings which take landscape as their subject without being explicitly topographical or descriptive. Through a suggestion of silvery clouds and mudflat she evokes a littoral: not a specific view or portrait of a place, but a larger statement about this type of country as a habitat for the spirit, a place where the imagination may soar. Photographs are used as reference, but the key energy of these paintings resides in Cook’s singular ability to recognize and identify the extraordinary in the ordinary. Her particular quality of recognition breathes through these images, animating them. Intuition and chance play their part, but they would be inert without the guiding principle of the artist’s vision. The pattern and rhythm of Cook’s life has changed radically with the birth of her daughter, and instead of spending most days in her studio she is now limited to two or three much more intense sessions per week. This has focused and polarized her studio activity, giving it a different edge and set of priorities. At the same time the experience of motherhood (‘the most tender thing I’ve ever felt’) has undoubtedly fed into her work.

Daisy Cook: The Descriptive Augmented Andrew Lambirth 2013 Every artist making work of value today has an intimate relationship with the art of the past, with the landscape and memory-scape of earlier times, with the habits and notions of preceding eras. We ignore these things at our own risk, for neither art nor humanity can exist in a vacuum. One of the main problems facing the contemporary artist is the urge to be original. Just as art students often don’t realize they are repeating the work of their predecessors (reinventing the wheel), so do supposedly more mature artists rashly jettison all sense of history in order to be up-to-date.   True originality comes not from chasing the gimmicky and ephemeral, but from a greater understanding of our position and condition. We need to study the past, to be connected to it, in order to make sense of the present and be able to edge into the future. Art can illuminate this course of action, by its dual investigation of the interior and exterior life. Daisy Cook’s new work brings these considerations close upon our senses, through paintings which evoke the previous histories of a landscape, the ghosts of presences and alignments long gone but still discernible. It is by no means accidental that in some of her latest paintings the trees begin to look like figures (or is it vice versa?). The thin liquid paint, with its runs and drips, suggests rather than states, while her colour evokes a complexity of mood that is almost archaeological in its analysis of varying traces.   Design, as in underlying structure, is here brought to the surface and allowed a dialogue with appearances. In a painting of trees, triangles of strong colour might occur in the interstices between branches, interrupting the clear outline of the tree’s form, challenging it. The obvious externals of nature are checked and balanced by geometry and abstract pattern, local colour is subverted with decorative colour, the descriptive augmented. We must not forget that landscape is active through its structure, through its forming effect on us, its inhabitants. Likewise is it active in Cook’s paintings – not a passive subject to be simply stared at, but a partner to collaborate with.     Under the clear unimpeded light of a high sky, Cook explores her personal relationship with the landscape she paints. (It is highly relevant that last year, in March 2012, she walked a section of the Camino de Santiago, the pilgrim route through Spain. She found the experience very moving.) Her paintings are traversed with roads and walkways, with crossings, as well as articulated through the push and pull of blocks of colour and a history of marks which appear and disappear through the layers of painterly activity. As do references to admired artists from Diebenkorn to Vaughan, though without in any way qualifying her sense of personal artistic authority. Blush of shoot and pallor of root are matched by the battlemented embodiment of a headland rising through mist; nature’s endurance and renewal. Like Eric Ravilious and Paul Nash, Daisy Cook is, in Robert Macfarlane’s telling and atmospheric phrase, an ‘artist of the path’, and as the ancient wisdom has it, it’s better to travel hopefully than arrive. Cook follows the maps of the heart down the landscape tracks, across the open spaces of her resonant paintings. The pilgrimage of art is subtly present in all her work: inner landscape conjoined with and commenting upon the outer. There is a new breadth to her imagery and a new tenderness, matched with resolution. Her work has never looked so richly beguiling.