William Scott – An Orchard of Pears, No.10 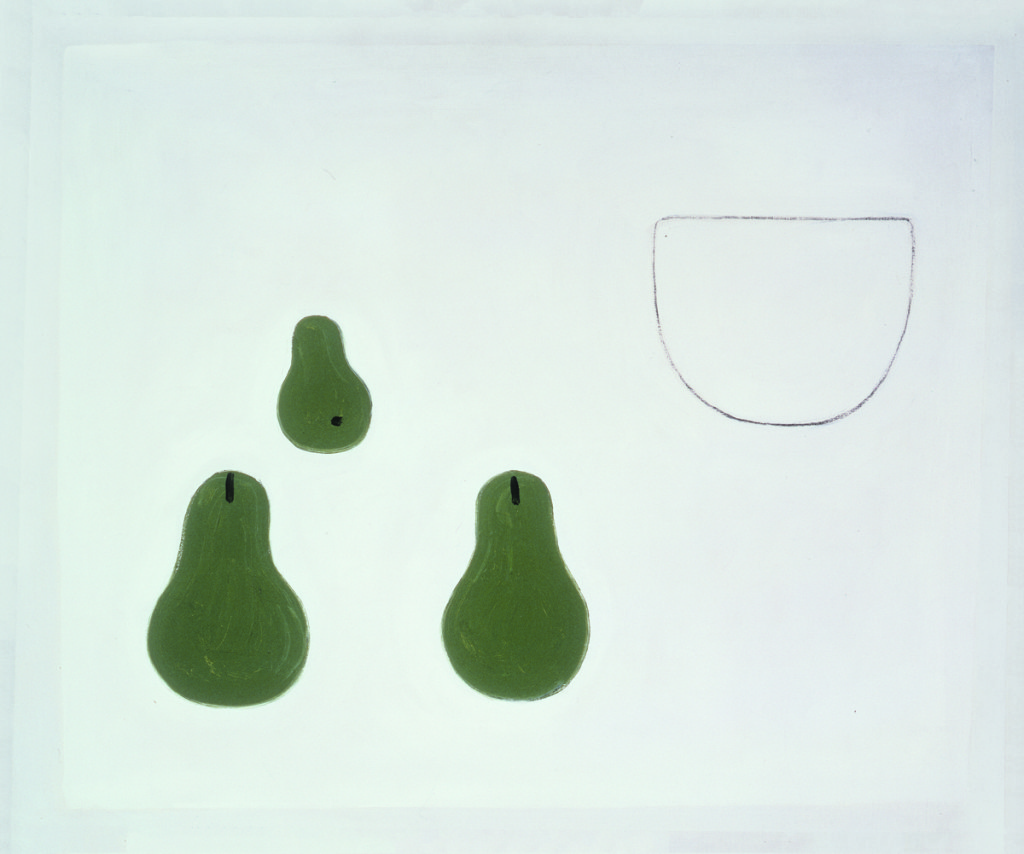 Private collection.
Direct from the estate.

The painting, which is unsigned, remained with the artist until gifted to the collector who owned it at the time of writing.

According to Lynton, the An Orchard of Pears series was realised in the autumn of 1976 Norbert Lynton, William Scott, Thames & Hudson. London. 2004, p. 334). However, when Scott showed the paintings as a group in Real Life, an exhibition of figurative art organised the following year by Edward Lucie-Smith as a Peter Moores Liverpool Project, they were dated 1977. It may be that the series was completed in early 1977, but the greater part of it appears to have been done earlier. According to Mary Scott, they had enjoyed particularly fine weather throughout the summer and Autumn of 1976, and as she told a friend, ‘William did some lovely paintings -all oils and mostly of pears. It was a memorable summer for our trees too!’ (Mary Scott, letter to Margot Davies, 9 March 1977). Of the ten works in the series that the William Scott Foundation has examined, all carry a series number painted by the artist on the verso. This suggests that the remaining seven are similarly inscribed. Whether the numbering relates to the order in which the paintings were executed remains a matter of conjecture. With this in mind, each one is ascribed here to ‘1976 or 1977′.

Lucie-Smith’s exhibition set out the various kinds of figurative art then being practised in England. As he saw it, two basic attitudes were discernible. In the text he wrote for the catalogue (which is printed in a newspaper format) he stated the following: ‘Some artists -the minority – seem to think of art as the creation of an individual system of symbols, which stand for what has been observed. William Scott’s pears, for instance, are hieroglyphs rather than representations. Others – the majority – seem engaged in an effort to bring what is seen and what is put on a canvas closer and closer together, without denying that seeing and painting are in fact different activities’ (he had in mind William Coldstream’s carefully plotted compositions’).

As Waldemar Januszczak pointed out in his review of Real Life, the most lavish part of the Liverpool installation was reserved for Scott and the artist Ian Gardner: ‘The scene is set by fake grass, four white garden obelisks, a continuous photographic frieze of hedgerows, and taped piano music. Brightening up a large gazebo in the centre [cat. no. 807, figs. a and b] are Scott’s suite of pears and Gardner’s studies of topiary’ (Waldemar Januszczak, ‘Life Worth Living’, Guardian, 15 June 1977). (The exhibition also included a few pictures by the old masters and Scott would surely have appreciated the fact that for the first – and last – time he shared an exhibition space with George Stubbs, the English painter he most admired.) Lucie-Smith, a poet as well as a critic, published a poem in the catalogue which is printed full page following the list of Scott’s paintings (Edward Lucie-Smith, ‘Five Morsels in the Form of pears’, in Real Life, exh. cat., Walker Art Gallery, Liverpool, 1977, p. 23). The poem is dedicated to Scott and Erik Satie (a reference to the composer’s composition for piano duet Trois morceaux en forme de poire). The many sexual allusions made throughout the five stanzas encourage the reader to interpret the paintings in a similar fashion. Given Scott’s own history of using the elements of a still life ‘to hint at something else’, as he put it, he obviously approved of Lucie-Smith’s extensive use of sexual metaphor (see cat. nos. 135,15o and 254). The painter T.P. Flanagan, writing at a later date, was more subtle in his reading: ‘As with everything he drew, when Scott concentrated his attention upon them, the pears became endowed with several layers of meaning. He perceived them not only as fruit but as symbols of fruitfulness. He managed to establish a correspondence between a couple of pears on a plate as highly charged with erotic innuendo as any Baroque figurative allegory’ (T.P. Flanagan, ‘William Scott’, Independent, 24 January 1990) In his description of the An Orchard of Pears series, Lynton makes no mention of Real Life. thereby implying that the paintings were first shown as a group in the Gallery Kasahara exhibition of 1977, which opened in Osaka several months after the Liverpool exhibition closed. Writing about the Kasahara exhibition, Lynton reports that Scott ‘saw to it that the Orchard series was hung in a special sequence and at particular height to add to their interest as a series.’ (The image of the pear may have had a special appeal for a gallery-owner Ryunosuke Kasahara – and the Japanese art market – as the rather bottom-heavy fruits in some of the paintings in the series have a strong resemblance to a figure seen in a type of Japanese scroll known as the ‘Meditating Daruma’, an allusion to the nine years the Buddhist sage Bodhidharma spent in meditation in front of a wall.

The inspiration for the An Orchard of Pears series was the vigorous pear tree growing outside the artist’s studio at Coleford, a photograph of which is included in Kasahara 1977, with the artist standing beside it holding one of the fruits (cat. No. 807, fig.c) As Scott told Walter Moos, in a letter dated 5 January 1978, ‘I became a little obsessed with the tree on my studio wall last summer.’ That obsession had started the previous year, and continued into 1977, but signs had begun appearing as early as March 1975 when Scott sent Walter Moos a group of drawings ‘based on the theme of “fruit”. These drawings have not all been identified but at least one was a composition with two pears. In addition to the series An Orchard of Pears, Scott painted seven works titled Still Life, Pears, which he showed as a group at the Dawson Gallery, Dublin, in 1977.