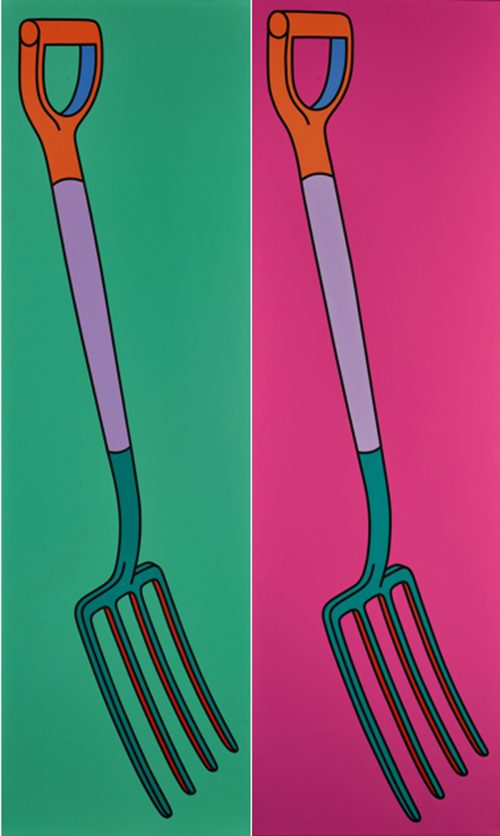 Michael Craig-Martin, Pitchfork on Green, Pitchfork on Pink 2003, Acrylic on canvas, in two parts, Each 153 x 46 cm, Each signed and dated 2003 on the canvas overlap
Bio

Michael Craig-Martin was born in Dublin Ireland in 1941.

He grew up and was educated in the United States, studying Fine Art at the Yale School of Art and Architecture. He has lived and worked in Britain since 1966.

Over the past forty-two years he has had numerous exhibitions and installations in galleries and museums across the world, including the Centre Pompidou, Paris, and MoMA, New York, the Kunstvereins in Dusseldorf, Stuttgart, and Hannover, at IVAM in Valencia, and Kunsthaus Bregenz. He represented Britain in the 23rd Sao Paulo Biennal. A retrospective of his work was presented at the Whitechapel Art Gallery, London, in 1989, and a second at the Irish Museum of Modern Art in Dublin in 2006, and a third at the Serpentine gallery, London, in 2015.

Craig-Martin is well known to have been an influential teacher at Goldsmiths College, London. He was a Tate Trustee from 1989 to 1999, was awarded a CBE in 2000 and was elected an RA in 2006. In 2016 he was knighted in the Queen’s Birthday Honours for his services to art.