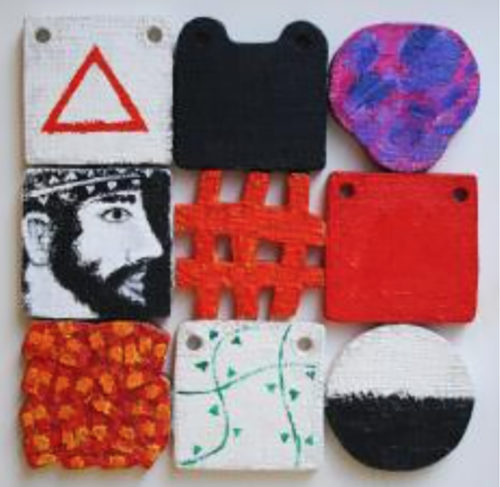 Joe Tilson was born in 1928 and is associated with the beginnings of POPART in London.

Having worked as a carpenter and joiner from 1944 to 1946, he served in the RAF until 1949. Following his National Service, he went to St Martin’s School of Art (with Leon Kossoff and Frank Auerbach) and became a member of the I.C.A, in Dover Street where he later met Richard Hamilton, Eduardo Paolozzi and Reyner Banham.

In 1952 he went to the Royal College of Art (with Peter Blake and Richard Smith). In 1955, after winning the Rome Prize, he went to live and work in Rome where he met Joslyn Morton who was studying with Marino Marini at the Brera in Milan. They lived together at Cefalú in Sicily and, in 1956, were married in Venice from their studio at Casa Frollo on the Giudecca. After some months in Catalonia with Peter Blake they returned to London IN 1957 where Tilson met Hockney and Caulfield who were students at the Royal College of Art.

He took up teaching positions over the next five years at St Martin’s School of Art and the Slade School of Fine Art before travelling to New York to teach at The School of Visual Arts.